How to stop Teens from drinking Red Bull

Netflix does its best to air infomercials at 4 in the morning.....

And the biggest Whammy of them all. All this and.....

The strains of the Rock & Roll Jeopardy! theme can mean one thing.....


With summer now in session, the Jeopardy! Teen Tournament is set to return. The new tournament begins Monday, June 17th and features fifteen of bright, American students in the 14-17 age range.
The contestants will compete over the course of two weeks to try to take home the event's grand prize of $100,000.
Jeopardy! is the quiz show that tests contestants by offering them answers for which they must form a question. While it's normally a show featuring adult contestants, the Teen Tournament shines the spotlight on a younger generation, giving them the chance to steal the show and earn a cash prize.
Here is the complete roster of Teen Tournament contestants, in alphabetical order:
- Justin Bolsen, a freshman from Canton, Ga.
- Avi Gupta, a senior from Portland, Ore.
- Jackson Jones, a junior from Louisville, Ky.
- Rohit Kataria, a junior from Wheelersburg, Ohio
- Sreekar Madabushi, a junior from Basking Ridge, N.J.
- Lucas Miner, a junior from Miami, Fla.
- Hannah Nekritz, a senior from Stamford, Conn.
- Teagan O'Sullivan, a freshman from Charlotte, N.C.
- Stephanie Pierson, a junior from Macon, Ga.
- Ryan Presler, an eighth-grader from Sioux Falls, S.D.
- Alison Purcell, a senior from Bellaire, Texas
- Audrey Sarin, a senior from Redmond, Wash.
- Eesha Sohail, a senior from Bakersfield, Calif.
- Sophia Weng, a junior from Chevy Chase, Md.
- Shriya Yarlagadda, a sophomore from Grand Blanc, Mich.


https://www.youtube.com/watch?v=F5XXLFpms0c
Madison: Some members of our viewing audience will receive..

A selection of Playbill Pride items from Playbill.com. Since June is Pride month, take advantage of our playbills that match the rainbow on top, plus t-shirts too. Now back to our latest Hamilton lottery winner, Pierre Kelly!


Me: Thank you Madi and welcome back. Later on, we take a look at an escape room for kindergartners.

What if you were forced to go without sleep for 24 hours and then take part in a series of mental and physical challenges? As insomniacs, students and serial binge-watchers would agree, this is not a good idea even at the best of times. But what if the prize was a million dollars? This is the premise of Netflix's brand new game show 'Awake: The Million Dollar Game', coming on the heels of the streaming platform's success with reruns of 'Jeopardy' and the introduction of their original game show 'Flinch'. Here's everything you need to know about the show:
Release Date: Details have been scarce about the new show with Netflix keeping production tightly under wraps. Reports in January 2019 revealed that the show was set to be launched this year. A placeholder page on the Netflix website has announced that the studio game show would arrive on June 14.
Premise: Each episode of the show will feature contestants who are forced to go 24 hours without rest before being subjected to grueling mental and physical tasks which promise to be as difficult as they are ridiculous. At the end of the episode, the last man (or woman) standing gets to go home with a million dollar jackpot. And with a prize like that at stake, there is bound to be no end of contestants ready to rise to the challenge. The Game Show Network's 'Cram' (2003), which ran for two seasons, is the only notable earlier game show to be built around sleep-deprivation as a premise, although many have tried and failed.
Host: The game will be hosted by actor, writer, and stand-up comic James Davis. He is best known for his show 'Hood Adjacent with James Davis' on Comedy Central. He has previously performed at multiple comedy and rap shows including big names like Drake, J. Cole and Big Sean.
Netflix has released a trailer for the first season of 'Awake'. The short preview showcases some of the most trying tasks that contestants will go through on the show's shiny studio stage while struggling to keep their eyes open and on the ball (or egg as the task may be). There are bound to be some exciting successes and hilarious fails once 'The Million Dollar Game' arrives on screens..

Even one contestant told her story to Game Show Live! and her interview was pre-taped. Watch.

In most mexican restaurants, Chips & Salsa is complimentary when you sit down at the table, but when you think of the dance, then dance shows on TV have proven it over the years. In this edition of Shanaigans, our cameras went to an LA Dance studio to visit a salsa queen. Watch.


Now we go from Mexican food to baking.

Lorraine Pascale and Jason Smith have their work cut out for them on the new season of Worst Bakers in America, as they try to transform eight kitchen disasters into baking masters. The intense five-week baking bootcamp begins on Monday, July 22nd at 10pm ET/PT, as Jason and Lorraine attempt to mold these masters of cake-wrecks and colossal cookie-fails into one vastly-improved pastry expert. Based on the recruits' performance and progress in a series of fast-paced baking challenges, they will be narrowed down each week until only two are left standing to face off in an intense battle. Only one will be the most improved and will rise to the top and earn the $25,000 grand prize.
"The baking blunders and mishaps of the recruits add dramatic comedy to the competition as they struggle to become better bakers on the new season of Worst Bakers in America," said Courtney White, President, Food Network. "It's no cakewalk for Lorraine Pascale and Jason Smith, but they are determined to whip the recruits into baking masters, teaching them the skills and techniques required to succeed in each of the difficult challenges."


Breakout fan favorites from "The Bachelor" franchise are back and ready for a second (or third or fourth) chance at finding love, as the hit series "Bachelor in Paradise" returns for Season 6 on a newly announced premiere date, MONDAY, AUG. 5 (8:00-10:01 p.m. EDT), on ABC. Episodes can also be viewed the next day on ABC.com, the ABC app or Hulu.
Starting the following week on Monday, Aug. 12, the show will air on both Mondays (8:00-10:01 p.m. EDT) and Tuesdays (8:00-10:00 p.m. EDT). Tune in to ABC's "Good Morning America" on MONDAY, JUNE 17 (7:00-9:00 a.m. EDT), on ABC for the very first announcement of some of the most beloved members of Bachelor Nation who will hit the Mexico beach resort this summer.


Next, 2 weeks ago, Carolyn Vasko broke out her cartoon impersonations for a Swagbucks Live Game. Watch.


This week’s *Classic Cartoon* game of @swagbuckslive was one of my favorites- these cartoons were a big part of my childhood, and I had so much fun re-visiting them to prepare for the game. Here are some of my favorite moments! 😂😂😂
A post shared by Carolyn Vasko (@carolyn.vasko) on Jun 7, 2019 at 2:03pm PDT

On to a Gamestop Game Break. It's time to play a game about TV and what to watch..... 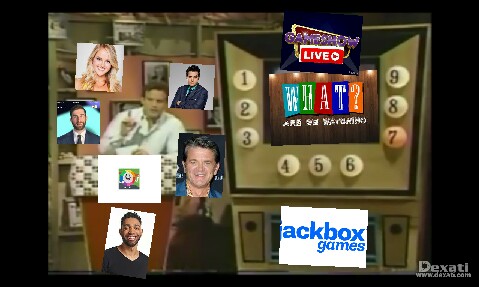 I have a stack of old TV guides left when the owners last last before the building got sold to us and I want you to find out what TV show I'm describing. Ready?

Twelve contestants show off their decorating, cooking, party-planning and entertaining skills in a reality competition to become "the country's new authority on at-home living." The winner gets a book deal and the chance to develop a syndicated TV show. Joan Lunden hosts.

So...What are We Watching? I'll give you a minute to think after a Google Play music interlude after our Bullseye Bonus island blode bombshell Audreyismusic covers a T-Swist song that has more stars than my glow in the dark ceiling at my manor. Like it or not, here goes!


And you need to know what the answer is, right? let's find out what were we watching....

A Reality Blurred article said this:

Kimberly Kennedy might have been crowned “the next great stylemaker” on Saturday night, but no one seems to care.
The only Google News story mentioning her is an Early Show story that gives instructions for making homemade invitations. (No ribbon flowers? Alas.) Chaos Theory blogged the finale, on which Kimberly ultimately competed against Mitch, her mortal Wickedly Perfect enemy. In an earlier episode, after cutting off the tip of his finger, he hysterically noted that he had more talent than Kimberly in the missing piece of finger.
Alas, the finale didn’t do well for CBS, as the network came in last place.


And now a word from our sponsor.


The New Press Your Luck on ABC is what game show fans were clamoring for. Sam may have had the biggest Whammy in the preview show, but come premiere time, one spin decided the fate. It's our....

https://youtu.be/crFOgpbTE5kThat's it for this week. Today's consolation prize is an escape hatch. When you're ready to leave, you won't need keys, just a door with a wheel to open. stays airlocked to keep burglars out.


Don't forget to email me at kellypierre8@gmail.com, coppockonsports@yahoo.com, Pierre Jason Kelly on FB and @Johnny_Arcade on twitter. Also I'm on Snapchat as MisterGSN and Instagram as Mister_WCW. We will return next Wednesday, and until we return, Play on playas.