https://www.youtube.com/watch?v=cxEausPgUdc
This week...The host of Divided gets the minus.....

And we multiply the results of teh GSN mid-year mid-term report card. All this and.....

It seems that one EP of Fremantle is exiting the TPIR Big Doors.....or teh LMAD Curtains.

Mike Richards, a veteran executive producer for "The Price Is Right" and "Let's Make a Deal," will be leaving both game shows after signing a multi-year overall deal with Sony Pictures Television. Richards will start working with Sony beginning in September.
Under the new deal, he will develop and produce game shows for Sony's network, cable, and streaming platforms. He worked on "The Price Is Right" for over 10 years.
"Bringing on an extraordinarily talented and versatile producer like Mike, who has been at the helm of two of the biggest franchises in daytime TV, reinforces our strong commitment to growing our game show business," Mike Hopkins, chairman of Sony Pictures Television, said. "Mike joining SPT fills out a veritable 'Dream Team' of outstanding producers, including Harry Friedman, who produces 'Jeopardy!' and 'Wheel of Fortune,' two of the longest running and most successful game shows in television. With these flagship shows, combined with international ratings juggernauts 'Shark Tank' and 'Who Wants To Be A Millionaire' and our successful Game Show Network, SPT's slate is unparalleled."
"I'm incredibly proud of what we've done to restore and transform the 'Price Is Right' and 'Let's Make a Deal' over the last decade," Richards said. "My focus has always been to create content that makes the world a better and happier place and I look forward to working with Mike Hopkins and the entire Sony team to create new shows that entertain and inspire."
Richards has won three Daytime Emmys and produced over 4,000 hours of game shows. He's also known for hosting five series, including "Beauty and the Geek," the Game Show Network's 2016-2017 version of "Divided," and the 2012 revival of "The Pyramid.".

Madison: Some members of our viewing audience will receive..

A season of your favorite book courtesy of serialbox.com. Why Serialbox.com? Well, it's like Audible, but with some titles that make you wish you were watching Netflix. Now, recently added to the Binjpipe queue, It's Pierre Kelly!


Me: Thank you Madi and welcome back. After being off for 2 weeks, we get to see a brand new edition of Starstruck G.C. Back To Basics. Here goes.


This kicked off the Stone-Stanley variety hour with STYD and Legends riding at an all-time high. Ron Maestri was the ringmaster of the quiz program and because all quiz programs seem to be bland but more competitive in variety, this one was going to be funny for it's answers and to show you why, here's a sample list:

And the question went like this:  "It's a great place to store your junk-a"; So the Answer is.....not jewelry box but Attica. Get the point?

In part 1, a series of 8 questions are asked, but without the answers being shown to the players, who must come up w/them on their own. Each correct answer is worth 75 points.
In part 2, the eight answers given by the contestants in part 1 are shown on the board, and a new series of questions corresponding to those answers are asked, with each correct answer worth 100 points. In addition, there are two "Quicksilver" answers during the course of the round, with each one worth 200 points if correct, and any player who answers such a question is given the chance to risk any part of his/her points on a follow-up question which also pertains to the first one. (NOTE: If the Quicksilver bonus prize was not won in the previous round, it carries over to this one)
The player with the most points at the end of this round wins the game, a prize, and goes on to play the "Silver Streak" bonus round.

Why the Silver Streak bonus round? Well, The player is shown a list of 15 answers, and then given 45 seconds to answer a series of questions w/the corresponding answer from that list. Each correct answer is worth $50, and 10 correct answers wins the grand prize (always a trip).

The show was tag teamed with Free 4 All in which we talked about last week (Thanks a lot, Haunted Hallway) and was in the same building as Quicksliver so the cameras spun around to see what Free 4 all is like. Also, they each taped 5 shows a day, but when Free 4 All got the boot, it was upped to 10. And both shows didn't hire announcers. Why? No idea. But to both shows, Happy 25th! Because USA Network originals were all cheap and fun.

Tomorrow is July 4th and while people watch fireworks in the sky, there's some trivia apps nearly every day that throw money like bottle rockets. Prepare to fire at will in.....

Looks like the Monster from Monroe, LA. seems to have a new look.

When mobile game developer Kiwi first released Joyride, the app looked familiar: Similar to wildly popular HQ Trivia, Joyride offered players the ability to win quiz shows in live broadcasts.
The key difference: Joyride's app wasn't home to just one trivia show, but multiple shows around topics like music, dating, fandom, and yes, trivia, all produced in the company's Santa Monica studio. "Our focus was on building a platform," said Kiwi CEO Omar Siddiqui.
A few weeks ago, the company took the next step on that journey, and opened up Joyride to everyone, giving users the ability to host their own live shows. "Anyone who downloads the app can start broadcasting," Siddiqui said.
In conjunction with that launch, Joyride also started a partner program, which is currently available on an invitation basis to more successful community broadcasters. Some of these partner broadcasters are already making hundreds of dollars a day from their broadcasts, according to a company spokesperson.
And while Joyride's hired hosts have been producing some 5 hours of live programming every day, the company says that it now streams 250 hours of broadcasts per day, thanks to shows produced by its community.
Siddiqui added that the company had signed up "thousands" of broadcasters since opening up its platform. He declined to comment on Joyride's number of active users, but a spokesperson said that returning users were spending on average around 20 minutes per day in the app, with subscribers spending around 70 minutes per day.

The party was already over for Confetti and with the clean up crew in effect for the time being, our cameras went to the show's host J.D. Witherspoon to express his feelings. Watch.


Points, for the children!
Also, RIP to confetti, or party sparkles, or streamers or whatever it was called....Come play the original @hqtrivia! The water is mad nice! pic.twitter.com/siuax9vQTA
— Matt Richards (@mattwasfunny) June 29, 2019

So.....they went with JD. Guess Mike wasn't the perfect hit for Confetti. But we go to HQ and not very good news.


News: HQ (the company behind @hqtrivia) laid off 7 employees today, leaving the company at under 30 employees now, per a source


That may be the beginning of the end for most fans and because of the new format and such, but the bitgwigs at the Terrible Tower of Rogowsky wanted to make more of a profit. And here's why.....

RT and reply with your username for a chance to win a free year. #wordseveryday
— HQ Words (@hqwords) June 26, 2019

Yep. one last free month to see Anna and her words for absoluetly nothing. Enjoy while it lasts.

http://www.qwizx.com/gssfx/usa/blockbredring.wav
Buzz-GSN where we ask you guys on the GSN facebook page everything and anything.

MzToni Warren  will begin with.....

"Why, why, why?. Would you take "IDIOT TEST" away and replace it woth this?. I Luv my girl Sherri Shepard but not in "IDIOT TEST'S" game time slot. , I don't even watch the new game. Fine myself still clicking on at 2:00a.m. only to be disapointed. Bring back "IDIOT TEST" plz. Put Sherri Sheperd in "COMMON KNOWLEDGE'S" spot."


Guess being a red carpet reporter is good, eh? Next up, Jeanine Hooper.

"Sherry Sheppard does not make a good game show host . She makes them dull, it’s like She doesn’t enjoy it either ."

At least she was good on Newlywed. Next up, Ethan Wallace.


"Can we please have something different from 4:30 to 11:30. instead of having just Family Feud."


And you left a question mark out. Next up, Jonathan Lahti.

Ok then we move on to Nathan battaglia.


Why do you think it’s ok to promote bullying in your promo for #bestevergameshow ? My kids want to know. The part where they tell Ken Jennings #nerdalert and everyone laughs at him and he is noticeably uncomfortable.
#stopbullying

Has this ever turned into the WWE? Maybe Leanne Tripett will end it.

"I really hate that y'all took Chain Reaction off during the day, yet The Chase still has two slots."

On to a Gamestop game break. Does this Password plus puzzle from 1979 help you out? 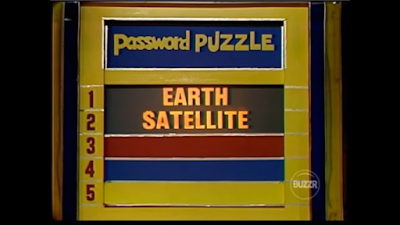 Give this one some thinking time after a Google Play music interlude as pur own mixed-tag mixmasters Scott & Ryceejo decide to do another Disney acapella mashup......but with instruments. For real? Check it.

And it's crystal clear that the answer is...... 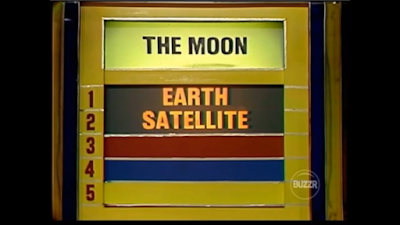 You guys are so over the moon. Love it!

Now our last story involves the library of Bert Kaempart......

Oh, it looks like a signal is intercepted to me in the newsroom. Let's check it out.....

Oh, it's the Starcade Sabercats Natalie & Tara and they have a message about conspiracy theory on the 4th. Let's check it out.

Every half year, we report on what GSN did so far in 2019 starting with the Good stuff.

Common Knowledge, Best Ever Trivia Show and America Says were sure fire winners and helped give GSN the boost it needed. Now to the failures.

Match game becomes the lone classic on the channel and GSN originals like Idiotest and Divided close out the programming day. Everything else modern takes the rest of the morning schedule. Before I grade the papers, shall I bring Mr Sunday movies out here please? He's new On Game Show Live! and here to discuss the post credits scene of the new Spider man movie. Please explain.

ANd please warn yourself. Spoilers abound.


B-minus. A little more improvement from last year but still a decent cable network regardless.

https://youtu.be/crFOgpbTE5kThat's it for this week. Today's consolation prize is a VHS copy of a movie that stars Michael Myers.......Oh, I'm sorry, Mike Myers. I guess The Love Guru is the only one we have. I wonder why that movie wasn't good. Anyway.....


Don't forget to email me at kellypierre8@gmail.com, coppockonsports@yahoo.com, Pierre Jason Kelly on FB and @Johnny_Arcade on twitter. Also I'm on Snapchat as MisterGSN and Instagram as Mister_WCW. We will return next Wednesday, and until we return, Play on playas.