(I tried the Fiery Mango Pizza at Cici's and let me tell you, it is awesome. Stuffed Crust Pizza is what I would recommend, so get on over to Cici's Pizza and try it today.)

VO: This is GSN The Know. The most informed and entertained blog in the United States of America. Now, from the WIlton-North building, here is the man about games, Pierre Kelly.

Me: You are being showered with the goodness GSN has made. Unlike a wedding shower or a baby shower, GSN gives you the gifts of game day & night. We are all wet with the greatest games in the world and let's weather the storm in......


He's a subsitute teacher from Michigan.  His name is Chad Mosher. His face has been seen on "Millionaire" and Wheel, but one day, he dissed Scott Rahner of GSNN for......just look at his tweet. His first one was....

So why did he call all him that? Well, Scott gets our facts accurate and simple. Nothing fake, nothing gimmicky. He even mentioned it in another tweet which says....


That link I'm posting it to you led to a longer tweet he made up. In it, he called him a con & a fraud. I'd say no, he's not one, he is the real deal, Lucille.

It led to a firestorm of comments including this from Casey Abell.....

Chad's fixated on something that happened two years ago. Don't quite know why, but people get fixated on the strangest things sometimes.

"By pure accident I happened to have written today about civility on the game show Interwebs, before I read this post by Scott. I then followed some of the links provided by Chad to the rumpus two years ago, and found much of the usual sputtering rage on Game Show Forum. (Yes, it is what's left of what used to be Matt Ottinger's board.)"


Even he made an article himself on GSF. So my advice to you is ignore what he's saying. Because He & I are real men who are passionate game show fans. Let that be a lesson over social media, the forums and fan sites.


In a few, our thoughts on Man Vs. Fly and how it led to one show's big dip. If you don't stay tuned, Kristen Nedopak will sing jazz standards in the rain, while holding an umbrella....and you without one, so stay dry and come back.


And we're rolling along to keep watching what GSN does what it always does.


Last week, GSN annouced a little short entitled "Man Vs. Fly." I say it's short, because it's a 3-minute interstital. If you don't know what that is, it's a little something to fill up time if there is much time left should a show end early. I decided a haiku would have impressions on it.

That suddenly led to a pain in the neck for Ben Gleib's show, because of MVF and the involvement of him introducing the program. But yesterday, it led to the consequences.  New runs of Man Versus Fly are no longer. GSN will air a new run tonight (Monday) at 1am ET and a rerun Friday at 2am ET. Man Versus Fly is pulled elsewhere, including its biggest slot, Wednesday nights.

But, Casey Abell of GSF pointed this out on his blog.


"We have added Man v Fly to the schedule for 8/24 – 8/28. Starting on August 24th and going forward, Man v Fly bouts will always air in the first position of the first commercial break [of whatever show contains the segment]." In other words, GSN is trying to minimize the damage by squeezing in the houseflies where they will be least noticed."


To put it another way, They'll try to flicker this off. After that....it's gone.


Time to make August go classical with some....


This would've been the last time MVF will go after Steampunk'd, but the decision this week stays as is. Also, Sherriwed gets trimmed. Haven't they heard enough from her? Expect a lot of Steampunk'd repeats in case they miss it. For next week.....

So once SW crowns a winner, Steampunk'd will get pushed back an hour early. Also, their special will air at 7 CDT.  BOTR will get one return on Sunday.  Idiotest will try and rebound from what happened last week.

With the semifinals of Skin Wars underway, here's what went down.

The Challenge got harder for the final 4 as they tried to create something from baby bumps. They only used a brush & sponge for this challenge. Aryn ended up the winner with the Mother Frog. Everyone hopped to the big challenge in which last season's winner Natalie Fletcher becomes a guest judge. In it, they had to do a nature blend and in the end, Avi won with the farm, but for Cheryl Ann and Lana being the botton 2, they had 1 hour and 30 minutes to create a backdrop of LA on a cityscape. Lana ended up with the victory and Cheryl Ann was gone.   ANd they all lived.....until the next show.
(song stops)

Okay, on to the 2nd intermission presented by swagbucks.com. Anomaly Acoustic August rolls on with Bianca Gisselle. She recently appeared in the LA stage version of "American Idiot," a broadway play based on the rock band Green Day. She now has a new EP entitled "Get Back To Love: Side A." She also has a weekly thing on Youtube called "Music Mondayz." Here is one of them.

And we go to the 3rd period.

As of today, there are 2 versions of Chain Reaction. I thought I'd contrast them, so let's look at them.

As far as the Dylan Lane version goes, I'll let Game Show Garbage speak for itself.

Now to the Catherwood version. 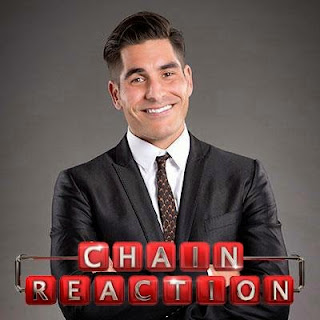 It seems that the version is a step up from the previous version. The Lane version had a Millionaire-lite feel to it. The Catherwood version has a much nicer set. Mike is better at hosting than Dylan has, and unlike Lane is never into obvilion when it gets cancelled. Even the speedchains are gone. No more "build-a-Word-one-at-a-time" bonus game, just a game in which you have to say words to connect to it. So there you have it, Catherwood over Lane any day. Any Day!

Time to throw it away, I think. Today's blog is presented by Ingrid Michaelson singing your OKCupid profiles. Proving once again that it's better than Tinder.


Don't forget to email me at kellypierre8@gmail.com, coppockonsports@yahoo.com, Pierre Jason Kelly on FB and @Johnny_Arcade on twitter.  We leave you know with more Bianca Gisselle. Play on playas.