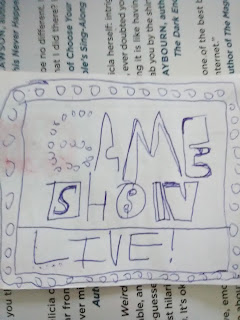 Now here is America's favorite contestant, Pierre Kelly!!!!!
Me: Thank you Madi2TheMax and this of course is  Game show Live! As live as it gets, as live as it happens and as live whenever you feel like it. Let's get into it with......
The whatstrending.com Opening Toss-Up story.

Most television game shows have buzzers to ring in on general knowledge in order to score. It takes speed and reflexes to buzz in before the time's up noise goes off.  But one game show in Pasadena has decided to do it their way.


Behold, I give you Buzz'd Out. The show in which regular buzzers are substituted with things you use to buzz in. For instance, crack a confetti egg over your head would be an example of a buzzer. Another example would be getting a paper airplane through a hula hoop, and perhaps you can spit cherries into a bucket to ring in. It's like Jeopardy! had to babysit Double Dare....or Fun House. Ben Benjamins keeps the loonies in line by asking trivia questions and adding some humor to the show and every round gets closer and closer to elimination. The sole survivor at the end gets a chintzy prize plus a gift card to a local establishment. Although it's much of a dark cheap set, the game gets a bit tedious when when trying to buzz in but gradually gets more fun when extra stipulations to buzzing in is added. The Hollywood Fringe Festival welcomed them with open arms by this link:

Even though it's only shown locally on the Arroyo Channel, the rest of the USA can be seen on Youtube:

https://www.youtube.com/watch?v=F5XXLFpms0c
Madison: Some members of our viewing audience will receive.....

A supply of bottled water from 7-11. The air quality is so bad in Maple Heights, you'll need it for a marathon run. So stock up on the cold water because it's hotter than......oh, let's say a pizza oven at Paula's Place. Yes, they still show GSN programming all the time. Now back to our Sauna fix-it man, Pierre Kelly!
Me: Thank you Madi and welcome back. What does IHMO mean? I'll tell you why later on.

To mark the 20th anniversary of the global hit game show, Who Wants To Be A Millionaire?, the iconic program will return to ITV for a week of celebratory episodes, starting this Saturday.
Airing as a stripped event across the week, the 7x60 minute episodes will play out every night and will be hosted by brand new presenter, Jeremy Clarkson.
The show will offer members of the public the chance to win £1,000,000. Each contestant will have the opportunity to answer 15 questions on their way to hopefully winning this life changing prize. The contestants will be helped along the way by familiar lifelines of 'Ask The Audience', 'Phone a Friend' and '50:50', plus a brand new fourth lifeline; 'Ask The Host'.
This brand new, additional lifeline allows the contestant to 'Ask The Host' if he [Jeremy Clarkson] knows the answer or if he has an opinion on what it might be. Jeremy never sees the questions ahead of the contestants so there is no guarantee he will know the answer. Will Jeremy be able to help someone along the way to winning one million pounds or will it cost them everything?
In another twist, contestants will be able to set their own second safety net amount. There is a fixed safety net at £1,000, meaning once a contestant has successfully answered Question 5 and won £1,000, that's the minimum they will take home. Traditionally, the second safety net was automatically set at £32,000. However, in these seven celebratory episodes, this new twist will allow the second safety net to be set by each contestant. Once they have banked £1,000, they will be given the opportunity to set their safety net ahead of the next question being asked. They can set their safety net only once and anywhere from £2,000 to £500,000. Will contestants be brave enough to risk losing big money in the hope to go all the way?
Jeremy Clarkson said "If the contestant chooses that lifeline [Ask The Host], they get to ask me if I know the answer. God help them. Anyone who doesn't win £1,000,000 is bound, at some point, to ask me if I know the answer. And if it's 1970's prog rock music, I probably will. If it's anything other than that, I probably won't."
On talking about the safety net changes, Jeremy Clarkson added "They can choose where it goes. So they choose how much they are going to lose at any given moment, which is a very clever idea. That requires balls of steel. To go beyond, say £32,000, when you're going to drop back to £1,000 if you get it wrong. To say, 'no I'll set it at £64,000 and risk losing £63,000 if I get it wrong', balls of steel."
The series will be produced by Stellify Media with filming taking place in Manchester. Commissioned for ITV by Siobhan Greene, Head of Entertainment, with Ben Kelly Commissioning Editor, it will be executive produced by Fiona Clark and Stellify's joint managing directors Kieran Doherty and Matthew Worthy, with Julia Knowles as Director.
Who Wants To Be A Millionaire is a Sony Pictures Television format. Who Wants To Be A Millionaire? starts Saturday 5th May at 9.15pm on ITV and continues nightly thorough-out the week at 9pm .


Don't swap your smartphones just yet.....

According to Deadline, Snapchat series PHONE SWAP is moving from its mobile environment to television. FOX signed a deal today to have the reality show, currently on Snapchat, to air on the network this summer.
The series involves individuals having the chance to trade phones with a stranger and look through it before deciding if they want to go on a date with them. Each half hour episode airs twice a week on Snapchat, where it is currently on its second season.

Second chances don't come often, but this season on "Alone" it's all about redemption as former participants of HISTORY's hit nonfiction survival series return in season five premiering Thursday, June 14 at 10PM ET/PT.
Dropped off in Northern Mongolia, the most remote location yet, the ten survivalists will be separated by miles and endure brutal, subzero temperatures, deadly predators and punishing isolation, as they push themselves once more to their limits. After coming up short in their respective seasons, these men and women have even greater motivations and well-planned strategies for survival. They must build their own shelters, hunt their own food, and overcome numerous deadly obstacles - such as the venomous Siberian Pit Viper and feral wolves - if they want to be the last person standing. With ten survival tools each, enough camera gear to self-document their experiences and a cash prize of $500,000 on the line, season five will bring higher stakes, impressive levels of ingenuity and a greater desire to succeed than ever before. No camera crew. No gimmicks. "Alone" is the utmost test of human will and fierce determination to overcome the elements. This season, who will have the strength to endure the longest and win the ultimate prize?


Hey there, HQties, not only this week the game will be for escalating amounts of cash but.....


Come Fridays, your buddies answers will be shown before you fire at the answer before the timer hits 0. Isn't that interesting?

We move on to Swag IQ. While HQ attracted big name stars such as The Rock and Martin Scorcese, This Sunday had..... 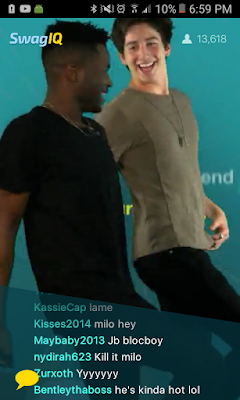 Milo Manheim from the film "Zombies" to test high school pop culture stuff. With the show adding social Media, Carolyn Vasko was taken under the hot lights for an interview. Watch.

You see them host SwagIQ weekly and we want you to get to know our amazing hosts! We sat down with Carolyn and asked her a few questions about herself. One fun fact: Carolyn (@cvasko) is a HUGE Harry Potter and Lord Of The Rings fan! #Swagbucks #SwagIQ
A post shared by SwagIQ (@playswagiq) on May 8, 2018 at 10:39am PDT


Oh, and I snuck in a picture of Devyn howard for you. 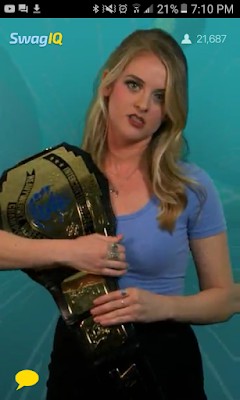 Over at the Q, Anthony from Long Island was the new host. Here, look. 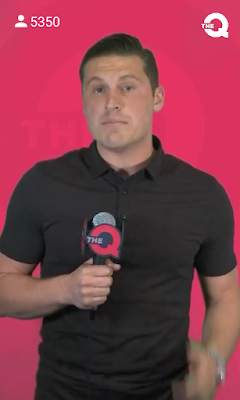 What did you think of him? I'll let the camera crew say it:

Apparently, we liked the old one better.

Time for a Gamestop Game Break. Solve this Idiotest if you will.

You'll find out after a Google Play music interlude because we go back 10 years ago to this old hit by Miley Cyrus.

But 1 thing I like is giving you the answer. Yoga at the park and the pie on the left isn't an inner piece. The puzzle on the right does. guess you found your inner peace in it.

Prom season is underway and our Lip Sync Idiotesters Kristin and Danny have a guide to how you can get to the prom.

Made by the same people who produced DWTS which is still around today obviously, 4 people try not to get greedy by being secret to find out how much is enough on money clocks that count up and down faster in seperate rounds. The 2 people with the highest combined total played for a total purse and the first to ring in just by stopping the clock won it all. Although it had 1 season, Corbin Bernsen fulfilled his dream by hosting this thing. guess he hosted the flop GSN had.

https://www.youtube.com/watch?v=SzI_DkHpLT0That's it for this week. Today's consolation prize is that Chinese prom dress you can take to the Met Gala. Go Ahead......impress the internet and the media while in New York with this dress. Who knows? David Wright might take a selfie with you.....oh wait that was the New York Mets. Sorry.

﻿Don't forget to email me at kellypierre8@gmail.com, coppockonsports@yahoo.com, Pierre Jason Kelly on FB and @Johnny_Arcade on twitter. Also I'm on Snapchat as MisterGSN and Instagram as Mister_WCW. We will return next Wednesday, and until we return, Play on playas.